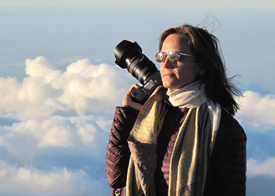 Gay has consistently juggled her parallel passions for the environment, public policy and communication through film all in an effort to deepen our human experience and success while on this marvelous planet.

She was born in 1965 to a ranching, entrepreneurial family in Oklahoma, lived mostly under the open skies of the West including Santa Fe New Mexico for the past 25 years.

Gay started making documentary films out of college in the late 80s. Her first, The WIPP Trail, narrated by Robert Redford, cast a critical eye at our nation’s first and still world’s only underground nuclear waste repository. It became a community organizing tool and aired on PBS nationally followed by a panel discussion. My Body Belongs to Me, a children’s pro-active educational program on sexual abuse, earned the American Film Festival award for “Guidance & Values Education”. Her company co-produced Dr. Andrew Weil’s first PBS programs in the mid 90s.

Gay then co-founded and managed two environmental technology companies: Earthstone International and Growstone. Under the Richardson Administration she served eight years on the EIB, a regulatory board in charge of environmental management and consumer protection for the State of New Mexico. Under her tenure the EIB spear-headed the passage of the most comprehensive regulations on greenhouse gases in the country.

She was one of only four Americans who joined Governor Richardson as his energy advisor on a private mission to North Korea in December 2010. Many believe this small delegation helped avert what likely could have ended in armed conflict /war.

Today, she is again concentrating her passion to inform and enlighten through her film company CNS Communications, LLC. The project, Dying to Know has been a labor of love she has cultivated on and off for 17 years; footage so compelling is was haunting her to finish. She is grateful to be back to her life’s passion making films & telling meaningful stories.

A film industry veteran producer and post-production specialist Michael’s career spans the domestic theatrical, independent and Latin American filmmaking industries at all budget. Over the decades he has always kept a keen eye out for great films with positive commercial potential that equally entertain and enlighten.

His view is informed by executive terms with CFI and Technicolor, a history in theatrical distribution, innovative film exhibition and curatorial film work at UCLA. Fortunate to have worked with some the best theatrical filmmakers of our time, Michael is most proud of his contributions to film preservation, festival programming and international cinema foundations. His personal projects have screened at festivals such as Cannes, Telluride, Sundance, New York, Toronto and San Sebastian.

Always a supporter of independent film, as the Co-Producer of Dying to Know, Michael found another opportunity to apply his creative, technical and management skills to a great team and important project in the New Mexico film community. The opportunity broadens his experience in the feature documentary field, where over the years, he has supported the production and distribution for various documentaries including: Imagine the Sound, Poetry in Motion; The King of Prussia; Underground; Cover-up: Behind the Iran Contra Affair; The Panama Deception; The Buena Vista Social Club and The Unheard Music.

Michael is a New Mexico filmmaker and photographer and partner in the digital consulting and educational company, Fahrenheit 444, LLC.

David Leach has been editing films for over 35 years. From 1971 to 1994, he cut commercials, documentaries and dramatic television series in Toronto, Canada, working in both 16mm and 35mm. He was Supervising Editor of TV drama series, and producer/director of several short films.
Since moving to Santa Fe, New Mexico in 1991, he has edited numerous episodes of television documentary series for TBS, TLC, National Geographic, Discovery, PBS and Hallmark, and has also edited several independent feature-length documentaries.
Dillingham chose David for his professional talent and keen sense of long form storytelling. He was a welcome inspiration to this complex narrative. Working side by side over the years Gay & David formed a productive, respectful partnership in the edit suite.

Ken Polk is a multi-award winning and Academy nominated Rerecording Mixer, Sound Designer and Sound Supervisor in both the film and television mediums as well as an award-winning Engineer and Producer.

A graduate from the UCLA School of Motion Picture-Television, he has been an accomplished creator in the sound and music business for facilities such as Warner Brothers, Skywalker Sound and Glen, Glenn/Todd-AO. A veteran of many dozens of films, his credits and work on both television series and mini-series, documentaries, feature films and music projects have garnered numerous nominations and awards that span many years. His extensive feature credits range from “The Untouchables” to “Juno” from “Akeelah and the Bee” to “The Hills Have Eyes.”

Ken immediately appreciated Dying to Know as an important film that encapsulates much social history from the last fifty years. Likewise the film has benefited greatly from his imagination, experience and professionalism. Documentaries, by nature, face unique audio challenges and in Ken’s capable hands, these challenges became opportunities to expand the reach of the film and give audiences a more complete cinema experience.

Steve Postell is a singer/songwriter, composer and guitarist now living in Los Angeles. Steve recently won two HOLLYWOOD MUSIC IN MEDIA awards for best song in the Americana/Roots and The Blues categories.

Steve manages Katonah Recording Studios and The Renegade Music Group. This past year he produced sessions for “On The Music Path”, a series of music lesson apps for the iPad, featuring such artists as Jackson Browne, Eric Johnson, and Richard Thompson, as well as releasing an Introduction To Guitar series of his own lessons. He recorded and mixed Ravi Shankar’s final two performances, to be released on DVD.

Steve is thrilled to have had the opportunity to create music for “Dying To Know”, which posed the challenge of musically matching the moods and eras of the many incarnations of Timothy Leary and Ram Dass, pioneers of the inner landscape as well as cultural revolutionaries.

New York artist, Dustin Lindblad created many of the beautiful hand-drawn illustrations found in Dying to Know. Her work evokes the Leary/Ram Dass period graphically intersecting the worlds of Eastern and Western thought and culture. Perfect for the subtext of the film, her mandalas and chapter headings form important story functions contribute essentially to the feeling and message of the film.

Dustin works as an art director, filmmaker, graphic designer and illustrator, integrating a diverse background of traditional visual arts, architectural design and animation. Her stated goal is, “to bring ideas to life through striking visual representations” and to combine critical thinking with moving imagery inspired by story and concept.